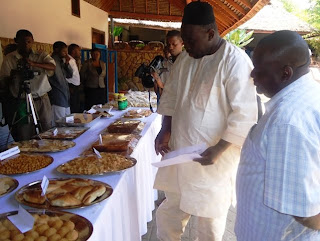 “Are all these made from cassava?” this was the most popular question of the day by people from all walks of life invited to the Mozambique Cassava Day held in Nampula, Mozambique in November 2010.

There was a wide array of foods made from cassava and its derivatives, cassava cakes, cupcakes, cookies, biscuits, bread, pies, samosas, chin chins, cocktail tit bits, doughnuts, egg rolls, meat balls, pancakes, croquettes, sausage rolls, and puddings to be sampled. All the other food items were made from 100% high quality cassava flour except for the bread which had wheat flour added. 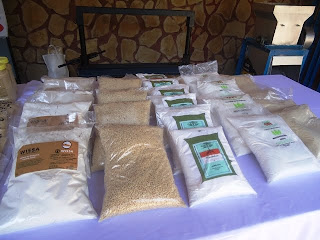 Speaking on behalf of the governor of Nampula, the Provincial Director of Commerce and Industry, Ilidio Marfres, said the crop had immense potential to develop the province. He was happy to note that the province’s strategic plan included exploring the use of cassava as a source of raw material for industries.

He challenged them to explore the wide range of uses and opportunities offered by cassava that go beyond making their staple food, ‘karakata’ – a paste made from its flour and ‘mathapa’ – cassava leaves cooked in coconut - to fight poverty and develop the region. 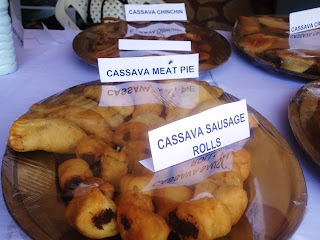 Richard Okechwuku, Deputy Project Manager of UPoCA project, noted the great strides made in the province in one year following a series of trainings conducted on cassava processing by the project.

“We were here last year, at a time like this, to train on the various products that can be made from cassava. Today, we are impressed to see so many products as a result of it.
” 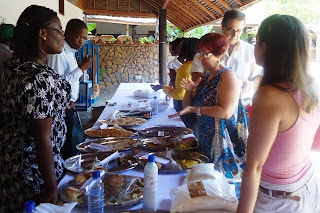 The day was organized to create awareness on the versatile hardy tuberous crop by IITA’s UPoCA project, Mozambique’s Center for Promotion of Agriculture (CEPAGRI), the Mozambican Agricultural Research Institute (IIAM) and the Provincial Office of Agriculture in Nampula (DPA).

It brought together farmers, private sector, non-governmental organizations, and government organizations and aimed at creating awareness on cassava utilization and lobbying for much-needed government support
Posted by Cath Njuguna at 4:55 AM 1 comment: Links to this post 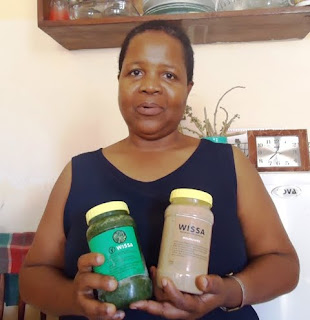 Relax, let me make your life easy. Do not spend so much time in the kitchen after a long day at work. This was the noble idea behind Wissa Ltd says its founder Judith Celeste Macuacua-Pinto and how she started making and selling ready-to-cook blended cassava leaves mixed with garlic and raw paw paw.

Today Wissa Ltd has grown into a small cottage industry with a diverse range of ready -to-eat and cook food products. It is also one of the enterprises benefiting from the UPoCA project in Mozambique.

The 56 year old widow says she closed her kindergarten in Maputo and moved to Nampula three years ago when her husband died. She first started processing castor oil but the company buying it was offering a very low price and so she changed to processing cassava leaves for making ‘mathapa’. This local delicacy made of cassava leaves cooked in coconut is very popular in Nampula but is tedious to prepare as the leaves have to be crushed to remove cyanide and soften them for cooking.

In 2008, she attended a meeting at the University of Eduardo Mondlane in Maputo, the first university in the country, on cassava processing. After the training, she requested for processing machines and after some negotiations she received a grater and 20 drying trays in October 2009 and started processing the crop. 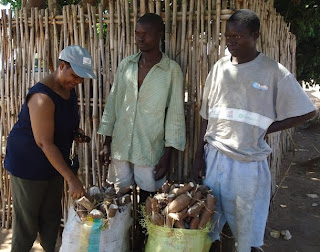 In 2009, she attended a series of trainings by UPoCA on processing cassava into marketable items such as high quality cassava flour, rale and starch as well as making a diverse range of products from the flour.

She was also trained on maintaining hygiene and safety standards, and packaging, labeling and marketing and says she has tried to implement everything she learnt. She worked with a designer in Maputo to make neat labels and has also sent samples to the government lab to get feedback on the nutrition and their safety.

She says she is now processing more than a tonne of high quality cassava flour in a month but the market is still low as the community prefers dark flour made from moldy cassava to make their local dish ‘karakata’.

“For them, the darker the flour, the more delicious the ‘karakata’ is. They need some time to get used to the idea of white flour,” she said. 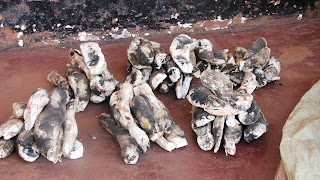 She also worked with UPoCA’s Agro-Enterprise Specialist, Melba Davis-Mussagy to develop a business plan. She says this has been a very useful exercise that led her to realize she was selling her cassava flour at a loss.

“From the business plan, I discovered I was selling a kg of cassava flour at 15 MZN but that barely meet the costs of the packaging material, the content and the labor costs. There was no profit. So I have now adjusted my price and sell at 25 MZN,” she said.

According to Davis-Mussagy, very few of the small-scale enterprises that UPoCA is supporting have business plans to guide their costing and future growth.

“I found out they did not know how to cost a kg of any of their products. They just set a price and they could not explain why and as a result, they were selling at a loss,” she said. “They have now understood the importance of detailing everything from their own labor, material, and transport costs. They also know which products give them the most profit.”
Posted by Cath Njuguna at 3:52 AM 1 comment: Links to this post

Two years ago, a great belief in the power of the cassava and impatient with the slow uptake of processing technologies motivated Ernesto Lopes to leave his job as an agricultural extension officer, after 25 years, to set up OLIMA Ltd to practically show that the crop can be a source of food and money. OLIMA means to farm in one of the local languages spoken in Nampula. 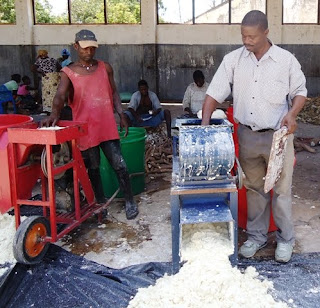 “We started promoting cassava processing from the 90’s in Nampula province which is Mozambique’s number one producer and consumer of the crop. However, up to now, the technologies have not picked up. So I decided to take it up upon myself to show by example,” he explained. “Many times people need to see things practically to believe.

The 47 year old father of nine set up a processing centre in an abandoned garage of the Caminhos de Ferro de Mozambique (Mozambique Railway) borrowing old machines that were lying idle at Mozambican Agricultural Research Institute (IIAM) at Nampula - a chipper, 2 graters, and a press to extract water from the grated cassava.
” 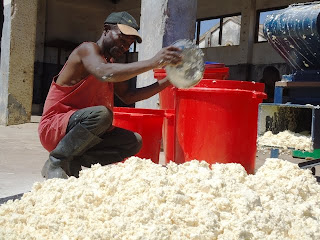 In March 2010 he started processing very slowly, experimenting with piles of cassava purchased from nearby farmers and processing into high quality cassava flour and starch. After a training by the Unleashing the Power of the Cassava in Africa (UPoCA) project of the International Institute of Tropical Agriculture (IITA) funded by USAID, he added rale.

As his products improved, his orders increased. He says he is now buying truckloads of cassava from the nearby farmers who are only too happy as it saves them a trip to the market and he purchases at a much better price. 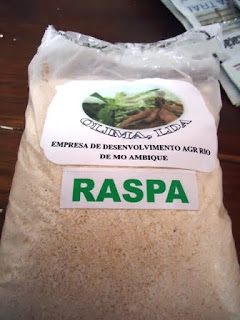 UPoCA also worked with him to develop a business plan in which he projects to increase his production to five tonnes of high quality cassava and one for starch, dried chips, and rale.

Currently, he has seven permanent employees and in a month sells approximately 500kgs of the flour, 100 kgs of starch, and 50 kgs of rale to local consumers who come to buy at the processing centre or at OLIMA offices in Nampula town.

“The government should also lead the way in exploiting the wide range of opportunities the cassava offers. For example promote the use of cassava in the bakery industry, ” he said.
Posted by Cath Njuguna at 3:39 AM No comments: Links to this post