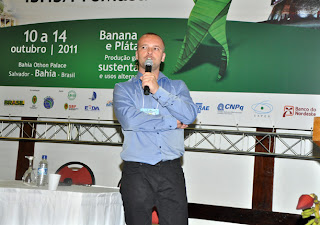 Farmers using banana plantlets produced through tissue culture, or TC plantlets as they are often called, can stand to increase their household annual income by as much as 50%, a study conducted in Kenya found. Such results support the claim that TC plantlets can help farmers make the transition from subsistence to small-scale commercial farming, but it’s more than just a matter of switching planting material.

TC plantlets are relatively fragile and require appropriate management practices if they are to realize their full potential, as Thomas Dubois of the International Institute of Tropical Agriculture (IITA) explained in a talk on lessons learned from East Africa presented during the fourth ISHS-ProMusa symposium in Brazil.

In East Africa, bananas are traditionally propagated by suckers. In Kenya, only 7% of the banana production area has been established using TC plantlets. In Uganda and Burundi, the area cultivated with TC plantlets is even lower. One reason is the higher cost of TC plantlets. Suckers may be cheaper for establishing a new field, they have a major drawback. They usually come with baggage, the pests and diseases they have picked up along the way, whereas the process of tissue culturing eliminates pathogens, except viruses which, as cell parasites, need to undergo specific therapies. In East Africa, however, the quality of TC plantlets tends to be variable, largely because commercial producers are for the most part unregulated. The IITA scientist underscored the urgent need for certification schemes to improve the quality and health status of TC plantlets.

Producing good quality plantlets is one thing. The manner in which TC plantlets are delivered to farmers is also important. In East Africa, developmental NGOs tend to be the main supplier of banana TC plantlets. While their intentions are good, notes Dubois, they can contribute to giving TC plantlets a bad reputation if farmers are not shown how to handle them, especially during the critical period immediately following transplantation in the field. If the plantlets get off to a wrong start and the harvest is below what they have been told to expect, farmers may tell their friends not to invest in TC plantlets. At least, that’s what Dubois and his colleagues believe happened when, as part of a study on the drivers of adoption, they found that having in one’s social network a high proportion of farmers who have used TC plantlets is negatively correlated with adoption of the technology. Some of these early adopters probably had negative experiences with banana TC plantlets and shared them with their friends.

“The transfer of TC material to subsistence farmers needs to be undertaken as part of an encompassing training program or input package” stresses Dubois, who also adds that offering TC plantlets at subsidized prices may also be counter-productive. “The technology will benefit farmers most when sustainable distribution systems are in place, through nurseries, for example.” The IITA researcher gives as a model Kenya, where nurseries for weaning and hardening plantlets are run independently from TC producers and are generally owned by farmer groups who are also customers of these nurseries.

To assess the impact of training, prospective nursery operators and farmers in Burundi, Kenya and Uganda were trained in technical and agronomic aspects (such as the construction and maintenance of humidity chambers and screenhouses for nursery operators, and water management after field transplantation for farmers), as well as in marketing, business, group formation and financing. The scientists then collected agronomic and economic data on 1,350 banana plants in 87 farmer fields in Burundi and Uganda. Farmers were randomly divided into three groups: non-TC farmers, untrained TC farmers, and trained TC farmers. During the first crop cycle, there was no difference in yield between farmers who had planted suckers and those who had used TC material but had not received training. However, because fewer plants were lost and larger bunches were harvested, yields in plots managed by TC farmers who had received training was twice as high. And because the trained farmers were better at marketing their bananas and obtaining higher prices, they earned up to three times as much as the untrained TC farmers.

In the end, however, the decision to invest in TC plants may be determined by the distance to market. Dubois and his colleagues saw a similar trend of diminishing returns the further away farmers are from their market, as has been observed for fertilizer use. In Uganda at least, it looks as if the economics are not favourable to a large-scale adoption of TC plantlets any time soon. Indeed, only 20% of the banana production occurs in the central region where it is most profitable to use TC plantlets because of the proximity to Kampala, the country’s capital and main market.

http://www.promusa.org/tiki-view_blog_post.php?postId=123
Posted by Cath Njuguna at 6:29 AM No comments: Links to this post 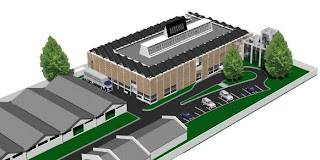 IITA hopes to boost its research efforts to secure the food and income for millions of smallholder farmers in eastern and central Africa, a region that experiences severe food shortages from time to time, with the construction of a state-of the art-science research block in Dar es Salaam, Tanzania.

The building whose foundation stone was laid by the country’s Prime Minister, Hon Mizengo Kayanza Peter Pinda recently, is expected to be completed in October next year (2012) and will serve the institute’s research for development activities in 17 countries in the region. 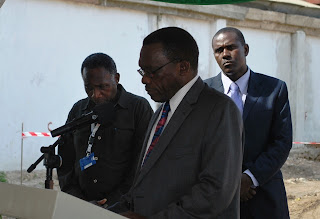 Speaking during the foundation-stone-laying ceremony, Hon Pinda thanked the IITA Board of Trustees for honoring the country by choosing it as the Regional Hub for eastern and central Africa and for investing its resources in the much needed building that will strengthen agricultural research in the country.

He noted the building would generate much needed scientific research to provide solutions to problems of food security and poverty alleviation therefore improving the lives of millions of small-holder farmers in the country and the region.

He said that agriculture was the backbone of Tanzania's economy and played an important role in its overall economic development and the livelihood of its people. He said statistics showed that in 2009, the agriculture sector contributed 24.6 percent towards the Country’s Gross Domestic Product (GDP) and during the 2009/2010 farming season, the sector managed to produce 12.32 million tonnes of food against an estimated demand of about 11.15 million tonnes, leading to food self-sufficiency of about 110.6 Percent. 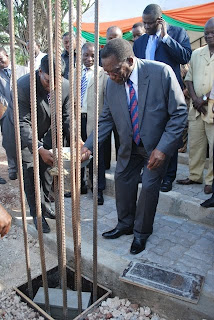 However, he said the overall productivity was still very low and that the country had not achieved its goals on food security and poverty alleviation by ensuring adequate and surplus food production, for local consumption and for export.

Furthermore, he noted there were still more challenges ahead in the pursuit for food self sufficiency and poverty alleviation posed by the increasing population coupled with global warming which, called for more investment of resources - money, human resource and infrastructure development and greater collaboration in agricultural research among local, regional and international institutions. 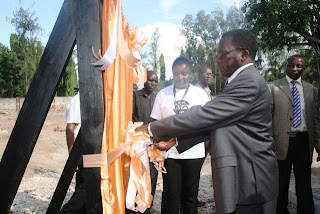 Agricultural research, Hon Pinda said, has a very important role to play to generate knowledge on how to sustainably increase productivity. These include providing improved high yielding varieties resistant to the major pests and diseases, good agronomical practices to get the maximum yield and sustainable and cost effective ways to control pests and diseases and on processing and proper post harvest handling of the farmers’ produce. 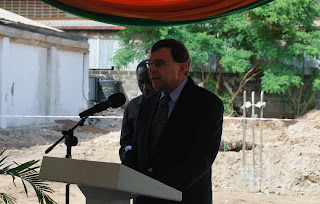 While welcoming the honorable Prime Minister to lay the building’s foundation stone, the outgoing Board chair Prof Bryan Harvey, in a speech read on his behalf by Prof Bruce Coulman -the new incoming board chair-, thanked the Government of Tanzania for its commitment to agriculture and agricultural research in the country.

He said that IITA had been operating in Tanzania for many years, primarily through special projects, but was elevated to be the institute's regional hub for East and Central Africa in 2005 to support the expansion of the its (th institute’s) activities in the region.

He said the expansion created the need for more space and resources and hence the decision, once more by the Board of Trustees, to acquire the present property of 2.3 acres and to invest in new research facilities, one of which was the modern and energy-efficient science block which was the first of its kind in Tanzania. 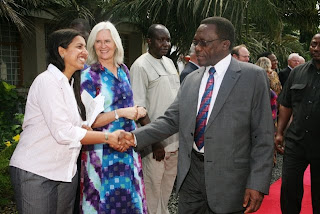 The IITA science building is an ultra-modern, environmentally friendly building with state-of-the-art, energy-efficient construction, appliances, and renewable energy sources, such as solar water heating, solar power, and natural lighting. It will reduce its energy use by 65-70% with efficient air handling control. It is dedicated to the fight against hunger and poverty and will contribute towards boosting agricultural productivity in the region.
Posted by Cath Njuguna at 4:17 AM 1 comment: Links to this post