The Kenyan government warmly welcomed a project seeking to identify and avail to farmers a natural, safe, and cost-effective solution to prevent aflatoxin contamination in maize and peanut in the country and pledged its support to ensure it was a success. 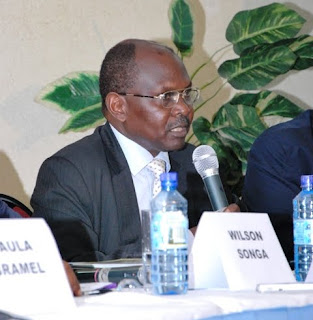 Noting the importance of maize in the country where it is the number one staple, Dr Wilson Songa, Agricultural Secretary in Kenya’s Ministry of Agriculture said the country needed the initiative yesterday.

Kenya, aflatoxin hot spot
“Kenya has become a hotspot of aflatoxin contamination. In 2004, 150 people died after eating contaminated maize. Last year we had 2.3 million bags of maize contaminated. Currently we have 160,000 bags of infested maize that are not only taking up storage but are also a problem to dispose off. It is a nightmare. That is why I say this launch should have been yesterday!” he said while launching the Bill and Melinda Gates Foundation (B&MGF) funded project, on June 3, 2011, in Nairobi.

He said this was one area that the Kenyan government could not afford to go slow on. “We are happy with the innovative scientific solution which has done well in Nigeria. The ball is now in our court and we shall move fast so our farmers start benefiting from the technology.”

IITA’s Deputy Director General, Research for Development, Paula Bramel said IITA was pleased to be part of this exciting project which would see its biocontrol solution for aflatoxin reach the farmers.

“This project will take our biocontrol product, commercialize it, and make it available to farmers. We have worked on it for many years, tested it in many fields in Nigeria and we are pleased with its effectiveness,” she aid. “And we are optimistic it will help farmers.”

She thanked the Bill and Melinda Gates Foundation for their support and Peter Cotty from United States Department of Agriculture (USDA) for sharing on the experience in the US and his collaboration and commitment to the project.

Dr Prem Warrior, a senior Program Officer from the Bill and Melinda Gates Foundation said aflatoxin impacted negatively on human health and was a great barrier to trade and economic growth.

“Today we have an opportunity to do something about it (aflatoxins). This project is a short term development strategy to test the technology and learn on product development issues. We have confidence in the technology but how we will commercialize it and who are our customers?” he said.

Acting Executive Director of African Agriculture Technology Foundation (AATF), Jacob Mignouna, noted that maize was an important staple food for 300 million people depending on the crop so its contamination was of great concern.

Director of Kenya Agricultural Research Organization (KARI) Ephraim was happy to note the speed at which the discussions on aflatoxin were moving from the boardroom down to where the problem was.

Deadly aflatoxin and its eliminator
Aflatoxin is a chemical produced by a fungus scientifically known as Aspergillus flavus, which suppresses the immune system, retards growth in children, and causes liver disease and death in both humans and domestic animals when exposed to levels above the recommended limits.

Explaining the technology, Dr Ranajit Bandyopadhay, IITA plant pathologist, said not all strains of the Aspergillus flavus fungi produce the toxins. The biocontrol solution works by introducing non-toxic fungi or 'the good guys,' that are able to outcompete and drastically reduce the population of their toxic relatives, or 'the bad guys' in affected field. 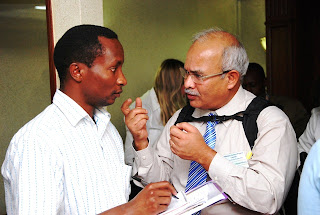 He said the technology held great promise as it was easy to use – farmers simply throw it in their fields three weeks before the flowering of the plants and this successfully protects the maize and peanut while in the field and in storage.

The biocontrol was first developed by the United States Department of Agriculture – Agriculture Research Service (USDA-ARS) and is widely used in America to control Aflatoxin. Partnering with USDA, IITA has successfully adapted this technology for use in Nigeria where it has been widely tested with very promising results - it consistently reduced aflatoxin contamination in maize and groundnut by 80–90% and even some cases as high as 99%. It is now ready for registrations under the name 'Aflasfe' and the project will support its commercialization.

In Kenya, efforts to seek a biocontrol solution have been on-going for 4 years and great progress has also been made. Potential strains of non-toxic fungi have been identified and the project will narrow down to the most effective strain that will be registered and packaged into a product.

The project partners are IITA, USDA-DAR, KARI and AATF.

Posted by Cath Njuguna at 4:20 AM No comments: Links to this post