The push for a “Green Revolution” in Africa to increase agricultural production for food and economic development will not bear much fruit if adequate attention is not paid to managing soil fertility in the continent.
According to Dr Nteranya Sanginga, IITA Director General, Africa cannot achieve a “Green Revolution” without first having a “Brown Revolution”. He noted that the current application of 8 kg/ha of soil nutrients, whether organic or inorganic fertilizers, was very low and was a major setback to the continent’s vision of adequately feeding itself.

Dr Sanginga spoke at the Global Cassava Partnership meeting currently taking place this week in Kampala, Uganda, that brought together over 400 international scientists from all over the world to strategize on how cassava can play a bigger role in economic development by exploiting the diverse uses of this hardy crop. Cassava performs well under harsh conditions, such as poor soils and drought.

The conference was launched by the Honourble Minister of Agriculture, Animal Industry and Fisheries, Hon Tress Bucyanayandi who noted that frequent droughts and floods as a result of climate change were one of the leading causes of food insecurity in the world today with millions of USD going into emergency food aid. 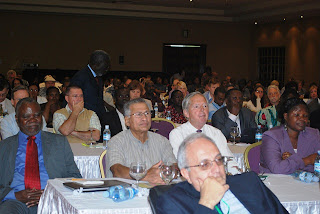 He noted that cassava was a crop that performs well in drought conditions and is becoming an important food security crop. He therefore urged the researchers gathered at the conference to develop solutions to some of the challenges facing the production of the crop in the region such as Cassava Mosaic Disease (CMD) and Cassava Brown Streak Disease (CBSD), the two diseases wreaking havoc on the crop’s production.

Dr Eugene Terry from Transfarm Africa noted that a number of efforts to transform cassava were already underway in the region starting with the development and deployment of improved better yielding varieties by IITA. He noted that over 80% of the new varieties released by national programs in Africa had incorporated these varieties released in the 1970’s and dubbed TMS series.

He said there were many challenges facing the transformation of the crop that needed to be tackled through research including control of pests and diseases and the need for early maturing and drought tolerant varieties. On marketing issues, he said there was need to research on better organization of value chains, better infrastructure support and how to reduce transaction costs.

Dr Sanginga on his part told the conference participants that while much investment had gone into developing high-yielding cassava varieties that were resistant to some of the major pests and diseases, the gains achieved cannot be realized if these varieties are grown in poor soils.

He said it was unfortunate that cassava had been tagged for many years as a poor man’s crop that does not require much input such as fertilizers. He argued that the crop harvested as much nutrients from the soil as other crops and that these nutrients needed to be replenished. It also requires nitrogen, phosphorous, and potassium similar to other crops.

“Nutrient use in cassava has been very minimal as it is considered a poor man’s crop. However, if we are talking about cassava transformation, about increasing cassava production not only for food but also for commercial use, we must change these wrong perceptions. If we think of growing cassava in soils that are too poor for other crops such as maize,” he said, “then, we are missing the other half of the equation.”

The African Union has recommended for the countries in the continent to increase application of soil nutrients to 50 kg/ha of nutrients combining both organic and inorganic fertilizers.

The Global Cassava Partnership for the 21st Century (GCP21) conference is taking place on 18–22 June 2012 in Kampala, Uganda. GCP21 consists of 45 member institutions working on research and development of cassava, a staple crop relied on by more than 700 million people worldwide. The ultimate goal of the partnership is to improve cassava productivity through scientific research and development.
The conference participants include representatives from NARS, international agricultural research centers, advanced laboratories and universities from developed and developing countries, United Nations’ agencies, governmental and non-governmental organizations, donor and development organizations, businesses in the ag-biotechnology and food processing industries.
Posted by Cath Njuguna at 3:56 AM No comments: Links to this post

The IITA Director General, Dr Nteranya Sanginga, was last week, from 11 – 15 June 2012, in Zambia, to meet different partners of the institute to explore ways to strengthen relationships and support each other in efforts to find solutions to hunger and poverty in the country and beyond.


The partners welcomed the move by IITA to invest in first class research facilities and increase the number and diversity of scientists working in Lusaka, Zambia, its regional hub for Southern Africa and serving 13 countries in the region


The hub is one of four that the institute is working through as it decentralizes its activities to have more impact as part of its ambitious plan to get 20 million people out of poverty in Sub-Saharan Africa in the next ten years as spelt out in its refreshed strategy.


The hubs are in Nigeria for the West, Tanzania for Eastern, Zambia for Southern and Democratic Republic of Congo for Central Africa.

Tackling succession crisis in agricultural research
Sanginga said the institute was going to especially focus on building capacity of researchers from national research institutes and institutions of higher learning.

He noted that many countries in Africa were heading towards a crisis as the current experienced civil servants in the agricultural sector who were retiring did not have qualified predecessors to take over.

“In Zambia, in Congo, in Kenya and in many other African countries, the situation is the same. We have scientists at the prime of their career being forced to retire because they have attained retirement age of 50 – 55 years. On the other hand, there are very few experienced staff to take over from them. So at IITA we are exploring how to make use of the knowledge and skills of these retirees and how to build the capacity of young researchers and attract the young people to agriculture,” he said.

This was welcomed by the Acting Director of ZARI Dr Moses Mwale and the Dean of the School of Faculty of Agriculture Sciences, University of Zambia, Dr Mick Mwala and their colleagues.

Crop diversification
Dr Sanginga also noted that there was need for African countries to diversify their staple crops particularly to avoid over reliance on maize. This was supported by country representatives of FAO, Mr Adrianus Spijker and Africa Development Bank (AfDB), Dr Freddie Kwesiga who noted that over-reliance on maize as a food staple and income crop in Zambia was not sustainable particularly in the face of climate change and dependency on rain-fed agriculture.

They identified cassava as one crop they were keen on promoting as it was a hardy crop with uses that went beyond just being a food crop.

Dr Sanginga assured them that IITA had many years of working along the cassava value chain and would lend its expertise to support the country in its diversification efforts.

He gave an example of Nigeria where the policy of including 20% cassava flour was saving the country millions of US dollars from reduced wheat importation and was creating jobs for thousands of young people.

FAO country representative, Mr Spijker noted that IITA and FAO had achieved significant success in dealing with Cassava Mosaic Diseases (CMD) in DRC. He said IITA’s new disease-resistant varieties distributed all over the country, with support from FAO and other partners, had averted a major disaster. He was therefore more than happy to collaborate with IITA to make a difference in Zambia.

Sanginga said the institute was also focusing on strengthening its research on Natural Resource Management, and partnership with National Agricultural Research Systems (NARS) for better impact.

Sanginga was accompanied by the IITA director for Southern Africa, David Chikoye and Steve Boahen, and Alene Arega, the Country representatives for Mozambique and Malawi respectively.

In his short busy program in Zambia, Sanginga also made brief presentations at the University of Zambia, at the FAO offices, had a media briefing in addition to holding a meeting with all IITA staff in Zambia.
Posted by Cath Njuguna at 3:03 AM No comments: Links to this post