War for food, war for space. Is this the future of Central Africa? 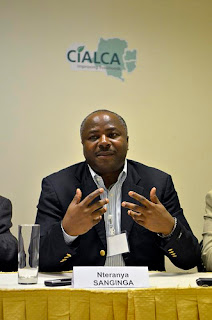 Unless there is widespread adoption of sustainable agricultural intensification in Central Africa region, the future looks grim, according to Nteranya Sanginga, director general designate of the International Institute of Tropical Agriculture (IITA).

Speaking to journalists at a press conference on the opening day of the CIALCA conference, Challenges and opportunities for agricultural intensification of the humid highland systems of sub-Saharan Africa, in Kigali, Rwanda, today, Sanginga made the scale of the challenge in the region clear.

“In Rwanda and Burundi…we have almost 400 inhabitants per square kilometre. That’s huge. The question will be, can the land support the population we have?”
Without sustainable intensification of food production, there will be a high price, he continued.

“We will be going back to the situation of war – and not because of ethnicity – war for food, war for space. “

Delegates at the CIALCA conference are hearing about and sharing some examples of sustainable agricultural intensification in the Great Lakes Region of Africa.

Examples include the widespread adoption of high-yielding climbing beans in Rwanda to boost food production, dietary protein, and improve soil fertility, and efforts to intercrop high-value coffee plants, with staple crops like banana.

Hopefully, it is these kinds of innovations that can help steer the region towards a brighter future. 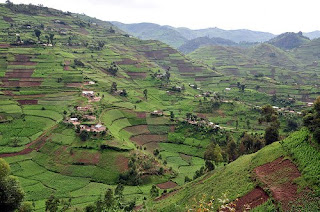 Experts highlight Rwanda’s progress in food security, but warn of significant challenges for Africa’s most conflict-ridden region in the face of climate change

KIGALI, RWANDA (25 October 2011) – Unless there is widespread use of farm approaches and innovations that can grow more food with less land, countries in Central Africa’s densely populated Great Lakes region could face increased conflict and greater instability in coming decades, warned agricultural experts meeting in Kigali this week to examine the challenges and opportunities for sustainably improving farm production in Central Africa.

Although good rainfall and temperatures make Central Africa one of the continent’s most high-potential farming areas, small farm sizes, persistent civil conflicts, poor infrastructure and political instability have left the region plagued with chronic food insecurity and the highest rates of malnutrition and extreme poverty in sub-Saharan Africa.

The Great Lakes region includes Burundi, eastern Democratic Republic of Congo, Rwanda, Uganda, northwestern Kenya and Tanzania. Most of the agricultural land has extremely high population densities – up to 400 people per square kilometer in Rwanda and Burundi – and severely degraded soils.

The eastern Democratic Republic of Congo has been in a state of almost continual instability and periodic violence since 1996. The International Rescue Committee has estimated that 5.4 million excess deaths resulted between the start of the second Congolese war in 1998 and 2007. A decade of conflicts in Burundi and the 1994 genocide in Rwanda are responsible for widespread displacement and regional instability.

“Previous conflicts have been indirectly driven by the ability of the land to support the food needs of Central Africa’s high population densities,” said Nteranya Sanginga, a Congolese scientist and director general designate of the International Institute of Tropical Agriculture (IITA) speaking in Kigali.

“In the future, a big question will be whether the land and the soils that underpin farm yields can support booming populations under new constraints like rapid climate change and other environmental factors,” continued Sanginga. “Without sustainable intensification of food production, there will be a high price. We will be going back to the situation of war – and not because of ethnicity – war for food, war for space.”

Indeed, the effects of climate change in the region are a major concern for the already resource-strained, landlocked countries of Rwanda, Burundi and Democratic Republic of Congo. Recent research by the International Center for Tropical Agriculture (CIAT) has shown that the ability of farmers to grow coffee – one of Rwanda’s largest cash crops – is severely affected by rising temperatures, making it more susceptible to pests and diseases.

The Consortium for Improving Agriculture-based Livelihoods in Central Africa (CIALCA) and the CGIAR Research Program on the Humid Tropics today opened the first international conference to examine the challenges and opportunities for intensifying farm production in sub-Saharan Africa’s humid tropical regions.

During the morning’s keynote speech, Hans Herren, president of the Millennium Institute and World Food Prize Laureate, argued that many current approaches to farm production are harmful to the environment and not accessible enough for farmers to adopt on a broader scale.

Participants at the CIALCA conference shared examples of sustainable farm approaches that can increase yields and alleviate land pressure in the region.

These include the widespread adoption of higher-yielding climbing beans in Rwanda that improve soils and the availability of dietary protein and intercrop high-value coffee plants with banana in Uganda, Rwanda and Burundi.

“Hopefully, it is these kinds of innovations that can help to steer the region towards a brighter future,” said Jos Kalders, representing Belgium’s Directorate General for Development Cooperation (DGDC), which funds the work of the Consortium.

And while significant progress has been made in the region, scientists also drew attention to the severe yield gap of sub-Saharan Africa’s agricultural productivity. Staple crops such as maize, millet, beans, sweet potato and cassava are being produced at 60 percent to 90 percent below their potential.

“The region and the global community cannot afford to wait for pressures to mount again before acting,” said Kalders. “Addressing social and environmental pressure through sustainable farm intensification should be given a priority focus to reduce the immense pressure the region is under now.”

The Consortium for Improving Agriculture-based Livelihoods in Central Africa (CIALCA) is a Consortium of the International Institute of Tropical Agriculture (IITA), Bioversity International and the International Centre for Tropical Agriculture (CIAT) and their national research and development partners, supported by the Belgian Directorate General for Development Cooperation (DGDC), and aiming at improving livelihoods through enhancing income, health, and the natural resource base of smallholder farmers in Central Africa.

Bridge the gap between innovation and policy – change the paradigm 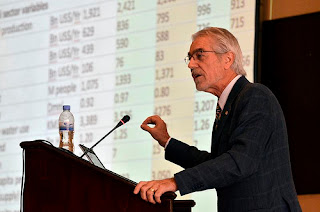 When it comes to food production and tackling hunger, we can’t continue with business-as-usual. We’ve been hearing that for years.

So, why is it still an issue?

According to Hans Herren, President of the Millennium Institute, it’s because scientific research and policymaking have become disconnected.

The 1995 World Food Prize winner’s passionate keynote address to around 300 agricultural scientists in Kigali, Rwanda, paved the way for a lively four-day conference onChallenges and opportunities for agricultural intensification of the humid highland systems of sub-saharan Africa, organized by CIALCA.

“While people are going hungry, the earth is being destroyed when, actually, we’ve known that we should have changed the course of agriculture long ago,” he said.

“Science has come up with a lot of good innovations (but) the policies have not followed. Business-as-usual is not an option – change the paradigm.”

Herren called for a better understanding of the complexity of agricultural systems, both above and below the ground.

Contemporary agriculture produces 4,600 kilo-calories per person, per day, he said. “No wonder we have half a billion obese people out there…We don’t need any more; we need it in different places, of a different quality, grown by different people.”

He also called for more investment in research and education.

“It can be done, and it has to be done now,” he concluded. 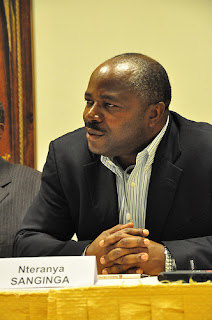 The Consortium for Improving Agriculture-based Livelihoods in Central Africa (CIALCA) and the CGIAR Research Programme on the Humid Tropics today opened the first international conference to examine the challenges and opportunities for intensifying farm production in sub-Saharan Africa’s humid tropical regions.

Although good rainfall and temperatures allow cropping most of the year, small farm sizes, persistent civil conflicts, poor infrastructure, and political instability have made it difficult for Central Africa’s small farmers to eke out a living. The region has some of the highest rates of food insecurity, malnutrition, and poverty in sub-Saharan Africa.

“When CIALCA first started, we thought this was the best opportunity to highlight that science can contribute to peace,” said Nteranya Sanginga, a Congolese scientist and Director General designate of IITA, which will lead a major global CGIAR research program for the humid tropics that builds off of CIALCA’s work.

“Achieving food security in CIALCA region is a big challenge,” said Sanginga. “If we don’t find solutions to food security under the current constraints, we will face major challenges and increased conflict over food, land, and other natural resources in the next few decades.”

During the opening plenary, CIALCA partners and representatives of the Rwandan government highlighted the success of several projects that are delivering results for farmers and national food security. In 2007, 20 out of 30 districts in Rwanda were reported as being food insecure. Today, as a result of increased public investment in agriculture and country’s National Crop Intensification Program, all of Rwanda’s districts are now food secure. In addition, the country is exporting surplus crops to neighboring countries and is the only country in the region not dealing with food crisis.

Rwanda’s Permanent Secretary for Agriculture, Ernest Ruzindaza, noted the importance of linking research knowledge to the needs of farmers on the ground and taking a more systemic approach to ensure food security and eradicate poverty.

“CAADP is here to support African countries in their push to support agriculture, but agriculture alone cannot solve the problem of poverty. Other rural development programs are need and agriculture is a key player,” he said.

http://cialcaconference.org/2011/10/24/cialca-partnership-highlights-contribution-of-research-to-bringing-stability-in-africa%e2%80%99s-great-lakes-region/
Posted by Cath Njuguna at 4:37 AM 3 comments: Links to this post