To celebrate International Day of Biodiversity, today CIFOR released exclusive images of the critically endangered Javan leopard. Only a few hundred of them are left in the wild and the photos are pretty incredible!

Just 100 kilometers from one of the world's most populated cities, camera traps placed in an Indonesian national park have captured striking, high-quality images of critically endangered Javan leopard. Learn more about how CIFOR is monitoring Indonesia's forest wildlife. Read more.

As Indonesia’s national parks face threats from deforestation and human encroachment, it’s vital that tigers, leopards and other large mammals be monitored as part of conservation efforts – otherwise clashes with people will intensify, a senior scientist with the Center for International Forestry Research warns. Read more.


CIFOR captures one of the world's rarest big cats on film

Posted by Godwin Atser at 8:23 AM No comments: Links to this post 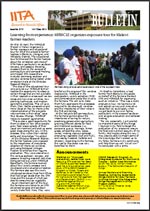 In this week's Bulletin the MIRACLE project organizes an exposure and educational tour in Malawi, amongst other stories.

Posted by Godwin Atser at 6:36 AM No comments: Links to this post 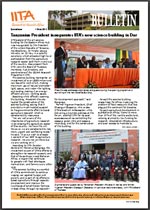 Our special issue of the Bulletin covers the launch of IITA’s state of the art Science Building in Dar es Salaam, Tanzania.

Posted by Godwin Atser at 4:16 AM No comments: Links to this post