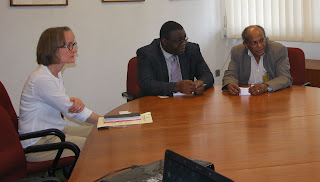 L-R: Drs. Ylva (IITA), Imoh (NAEC) and Amha
Officials of the nuclear energy watchdog, the International Atomic Energy Agency (IAEA) and the Nigerian Atomic Energy Commission (NAEC) paid a courtesy visit to IITA in Ibadan on Tuesday to explore areas of possible collaboration.
During the visit, Dr Mulugeta Amha, Section Head, Division for Africa, Department of Technical Cooperation for IAEA; and Dr Imoh Obioh, Commissioner International Cooperation & Liaison Directorate for NAEC, held discussions with Dr Ylva Hillbur, IITA Deputy Director General (Research).
Areas of interest to the team included plant breeding, micronutrients analysis, soil-water nutrient studies, extension of shelf life of crops using nuclear technologies, postharvest technologies and also capacity development. More areas of collaboration may come up when interactions with the organizations advance. Crops of interest to IAEA and NAEC include cassava and yam.
Dr Amha who was impressed with the visit said his organization had been working on yam and cassava with the Nigerian government, stressing that research could help tackle most of the challenges to global food production.
Dr Obioh on the other hand noted that the spiraling population and climate change were a wakeup call for Nigeria to pay greater attention to agriculture. He promised to strike collaborative efforts with IITA with a view to applying nuclear science in food security.
The two institutions – IITA and NAEC— agreed to move further by considering the signing of an MoU that will define mutual activities for the future.
Dr Hillbur expressed IITA’s willingness to work with IAEA and NAEC to improve the fortunes of farmers and consumers. END
For more information, contact: Godwin Atser; g.atser@cgiar.org

Posted by Godwin Atser at 6:07 AM No comments: Links to this post

Huge strides have been realized in transforming cassava from a food crop grown and eaten mostly by the poor to a commercial crop that can make money and improve the livelihoods of small-holder farmers in Tanzania. This is thanks to, among others, the activities of a two-phased project funded by the Common Funds for Commodity (CFC), led by the International Institute of Tropical Agriculture (IITA), and working with a wide range of partners in the country.

Cassava, a versatile crop that grows well under drought and in poor soils, is also a source of industrial raw material. However, this potential has not been well tapped in Tanzania where it is the second most important staple after maize.

According to Nicholas Cromme, CFC project manager who was in the country recently, after years of talking about cassava’s potential they were in the last mile of making cassava a commercial crop.

HQCF was, in the end, identified as the most profitable product from cassava in the country.

The second phase, from 2009 to 2013, focused on promoting the medium- and large-scale processing of HQCF. It also engaged a marketing specialist to carry out a market study to identify people’s perceptions on HQCF and the best way to market it. This led to the development of a brand for the flour which will be launched next year as a pilot phase.
“We first started by testing what farmers can do with cassava. But now for the first time, we have a product to market that has been developed as a result of a sophisticated market research. We have piqued the interest of a big flour milling company to process and sell it,” Cromme said.
Two-step processing
According to Dr Adebayo Abass, IITA’s Food Technologist and the regional coordinator of the project, a two-step cassava processing technique was introduced by the project to tackle the bottlenecks identified in Phase one.

“We have introduced two types of processors—intermediate and final processors. The intermediate processors purchase fresh cassava from farmers. They peel, wash, grate, and extract water using a pressing machine. The semi-dried grits which have a longer shelf life are then transported and sold to the final processor who dry, mill, package, and sell to the final consumers or industry.”

The project is also installing a mechanical drier which can process 8 tons of cassava per day with one of the final processors, Ukaya farm in Mkuranga district which is 40kms from Dar es Salaam, to enable the drying of semi-dry grits even during the rainy season. This will therefore ensure that the final processor is able to deliver HQCF with consistent quality and quantity to markets and industrial users.

Ukaya farm currently has nearly 80 acres of cassava and also has entered into contract farming agreement with 280 surrounding farmers to supply fresh cassava roots to it.
Sefu Mlaki, the director of the farm, says after hearing about cassava processing, they approached the project staff for more information and received a lot of support.
First, the project team developed a business plan for the farm which showed that it was possible to even recover all their investment in one year.

The farm has also entered into an agreement with the project to receive a flash drier on loan to enable it to process all year round. It will therefore receive and sell semi-dried grits from intermediate processors.

One such intermediate processor is Juma Mteta, 35, who set up his processing center in Bungu village, Rufiji, and sells dried chips to a Dar es Salaam-based company for milling into flour. He buys cassava for processing from over 350 farmers in his village.

One of his challenges is the lack of adequate water. He also needs a grating and pressing machine. The project will therefore help him to get a loan to construct a borehole and purchase large machines to process large quantities of cassava into semi-dried grits for sale to the final processor.
“The banking sector is still scared of giving credit to the farming sector. The project is therefore trying to link up with local banks to give credit to the processors in market terms. However, to make it affordable to the farmers and processors the project is considering providing credit guarantee to the bank and full technical assistance to the credit beneficiaries. This two-pronged approach will significantly decrease the risk margin for the banks, which in turn will lead to reduced interest rates,” said Cromme.

Significant increases in cassava processing
Dr Elifatio Towo, a scientist from the Food and Nutrition Centre (TFNC) and the project’s national coordinator, says there had been a remarkable increase in cassava processing in the country due to the project’s activities.
“HQCF production has increased from 28 tons in 2010 to 112 tons in 2012. The acreage of cassava grown for HQCF production has also increased from 28 acres in 2010 to 154 in 2012,” he said. “The number of farmers supplying the processors with cassava has increased by nearly four times from 549 in 2010 to over 2,000 farmers in 2012.”


The project is also being implemented in Zambia and Madagascar.
Posted by Cath Njuguna at 4:54 AM No comments: Links to this post